The Trial of Benedict XVI ‒ A Protestant’s Theological Response 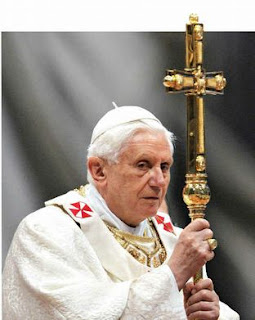 As a protestant minister I am no less concerned for the Church which professes Jesus as its Savior and King, no matter its confessional stripe, than a Roman Catholic or a Lutheran or a Greek Orthodox (to name a few stripes). I am also no less concerned with cases of sexual abuse among clergy. I currently serve in a church were two different church leaders, previous to my time, engaged in different forms of sexual misconduct (though of a different nature than pedophilia). I also know numerous stories of victims from other churches (victims of pedophilia). Clergy sexual abuse is not a strictly Catholic issue. So while I write from outside the Roman Catholic Church, I do not write from the outside of "the Church"—the community of Christ followers that sadly has too often and too long been inept and unjust in dealing with cases of sexual misconduct among its leaders. Protestants and Catholics can unite, at the very least, in repentance.

Jeff Israely and Howard Chua-Eoan's article "The Trial of Benedict XVI" has much to commend it. In a succinct way they chronicle the most pressing issue currently facing the Pope and his church‒child abuse by the priesthood. They are certainly correct that the response of the Roman Catholic Church (RCC) regarding priestly sexual abuse will be a sad mark on the history of RCC. How the Pope and the RCC as a whole responds from here will decide whether this generation sees the abuse cases as a hallmark of a consistently abusive church or an uncharacteristic blemish in the history of a church that has consistently sought to embody Christ on the earth—sometimes striving and other times struggling terribly.

The RCC has the opportunity to be, in the words of Jesus, "the light of the world" (Matthew 5:14) even in this awful situation. Up to this point the RCC has failed to be that beacon of the divine by pretending that deception, cover-up, and half-truths are the best way to deal with sin, a pretention that Jesus would not share. Being the light of the world in this situation will require the church honestly revealing its failures at every level and then pursuing the hard work of reconciling priests and parishes, perpetrators and victims thus bringing about justice and forgiveness. This isn't a time for scapegoats and secrecy. It is a time for church leaders to be honest and repentant about their failures. These failures, and part of repentance, will have difficult consequences.

Despite the strong journalism evident in the article, I take issue with two of its presuppositions. First, Israely and Chua-Eoan seem to imply that these sex-abuse cases would have been conducted more justly had they been handed over to local authorities. They wonder, "Why didn't the church simply report to the civil authorities the crimes its priests were suspected of committing?" Then they launch into a description of the RCC as a papal state system in which, "any suspicion involving misbehavior by priests or nuns would instinctively be reported up the church's chain of command rather than to—heaven forbid—the district attorney's office." This system made for priority of the "church and clergy, not the welfare of children" (40). It is certainly true that the RCC mishandled these situations with cover-ups. By the way, many protestant churches have mishandled similar situations just as badly. Still, it is ridiculous to simply suggest that justice would have been served had the DA's office been involved. Why would a system that is just as self-promoting and crippled by bureaucracy, if not more so, have been more effective in handling these cases? Furthermore, it is demonstrably true that the historical track record of the RCC has shown much more concern for the welfare of children than civic authorities. These cases were mishandled but not because DA's weren't involved. They were mishandled because justice and forgiveness were not the modus operandi.

My second issue with their article concerns blame. They chastise Ratzinger for assigning "wrongdoing not to the church but to its servants" (42). They are referring to Ratzinger's apparent unwillingness to expose and investigate the Vatican's administrative failures in handling the sex-abuse cases. I agree that these investigations ought to be made and that the administrators implicated, no matter how high up, ought to be held accountable for their actions. However, it is a mistake to assume that these administrators are "the church" any more than priests are "the church." Both groups are fallible servants of the church. In the same way, Mother Teresa is a servant of the church. Her work, which few would argue is not representative of the love of Christ, is service to the church. The difference is that her service resembles the church's ideal. Blaming the whole church for the failings of some will not do much for bringing about truth and justice‒ideals that Israely and Chua-Eoan both seem to champion.

You should check out the documentary "Deliver Us from Evil."