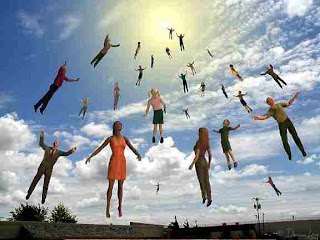 Yesterday afternoon a frantic member of the church called looking to speak to one of the two preaching ministers on staff. Unfortunately, both of them happened to be out of the office at that particular moment. Frustrated the man asked, “Is Saturday the end of the world?” He was, of course, referring to the nonsense espoused by familyradio.com. Their website claims that the Bible guarantees May 21, 2011 as “Judgment Day.”
Flustered by the question, our sweet little administrative assistant simply said, “Only God knows.” That was the end of the conversation. I only wish that was the end of the rapture craziness.
A quick glance through history shows that many well-intentioned but grossly uninformed Christians have made erroneous predictions about when the end of the world would come. As early as 172 CE a movement of Christians began claiming that they would be the last generation. One of their prophetesses declared, “After me there will no longer be a prophet, but the end” (Epiph. Haer. 48.2.4). At the dawn of the reformation, one of Martin Luther’s students, Thomas Müntzer (ca. 1488‒1525) became fascinated with end-times speculation. Müntzer believed that God promised a victory for the peasants against their feudal lords and that Müntzer, leading the charge, would catch the enemy’s cannonballs in his coat sleeves. When a rainbow appeared, he declared it was a confirmation that God would give the peasants victory. The revolt was crushed with devastating force shortly thereafter. More recently, Hal Lindsay in his wildly popular theological train-wreck, The Late Great Planet Earth

declared in no uncertain terms, that the “rapture” would occur in 1988. These are just a few of the many examples cited by Richard Kyle in his helpful little book, The Last Days are Here Again: A History of the End Times

. All of this speculation in spite of the fact that Jesus said, “no one knows, not even the angels of heaven, nor the Son, but only the father” when the day of judgment will come (Mt 24.36).

So, clearly history teaches us that predicting the last day of the world is stupid, but what about scripture? The claim of familyradio.com is that the Bible is the sole source of their prediction. Apparently they missed the thing that Jesus said about no one knowing? Regardless, it is worth pointing out that the key "rapture passages" teach the exact opposite of what rapture theorist claim. Not only is it not found in scripture, it is bad theology and it contradicts what Jesus does say about final judgment.
Let’s be clear. I am not saying there is no final judgment. I am saying there is NO RAPTURE. The word “rapture” appears nowhere in the Bible. So, we have to look at the definition of the rapture, by those who believe it, and look at scripture to see if the two align.
Rapture advocates define the rapture as,

His appearance in the clouds will be veiled to the human eye and NO ONE WILL SEE HIM. He will slip in, slip out; move in to get His jewels and slip out as under the cover of night.[1]

The word ‘rapture’ means to snatch away or take away. [. . .] Someday, [. . .] Jesus Christ is coming to take away all those who believe in Him. He is coming to meet all true believers in the air.[2]

The rapture is the secret coming of Christ to take his faithful church out of the world initiating the 7 year tribulation before the millennial kingdom. This idea is built on bad readings of scripture. There are two main passages cited to support the idea of a rapture. The first passage cited to support the rapture theory is Matthew 24.36-41. It is worth quoting the passage in full,

Rapture advocates suggest that the passage clearly refers to a rapture. Here you have the righteous being taken away unexpectedly. Unfortunately, the interpretation does not fit the passage. If you read the text closely, the righteous are not the ones taken, but rather it is those who did not expect the flood that will be “taken away” (Mt 24.39). Reading the text slowly it is obvious. So, at the coming of the son of man, the evil ones will be the ones will be “taken away” in judgment leaving the righteous. The logic of the passage is the exact opposite of a rapture of the righteous.
The second key passage is from Paul’s first letter to the Thessalonians (1 Thess 4.13-18). Again, the entirety of the passage requires quotation,

13 Brothers, we do not want you to be ignorant about those who fall asleep, or to grieve like the rest of men, who have no hope. 14 We believe that Jesus died and rose again and so we believe that God will bring with Jesus those who have fallen asleep in him. 15 According to the Lord’s own word, we tell you that we who are still alive, who are left till the coming [παρουσία] of the Lord, will certainly not precede those who have fallen asleep. 16 For the Lord himself will come down from heaven, with a loud command, with the voice of the archangel and with the trumpet call of God, and the dead in Christ will rise first. 17 After that, we who are still alive and are left will be caught up together with them in the clouds to meet [ἀπάντησιν] the Lord in the air. And so we will be with the Lord forever. 18 Therefore encourage each other with these words.

This is the most important rapture passage. Based on a superficial reading, rapture advocates suggest that here Paul is outlining how believers will be raptured at the second coming of Jesus.  This reading is problematic for a number of reasons. First, in a practical vein, what comfort would it be to the grieving Thessalonians that God would rapture some future generation of believers but let the Thessalonians go on suffering? Second, and more importantly, the language of the passage clearly indicates that Paul is not describing believers leaving earth forever, but rather meeting their king as he comes to reign on earth. The word for “meet” refers to a  meeting with someone for the purpose of bringing them back from where you originally came. The word occurs only two other times in the NT, both times indicate a meeting with the intent to return to the point of original (Acts 28.11-16; Mt 25.6). Similarly, the Jewish historian Josephus (Jewish Wars 7.100‒102) describes the scene of a conquering general marching into a city and "meeting" at his "coming,"
(100) But when the people of Antioch were informed that Titus was approaching, they were so glad at it, that they could not keep within their walls, but hasted away to give him the meeting; (101) nay, they proceeded as far as thirty furlongs, and more, with that intention. These were not the men only, but a multitude of women also with their children did the same; (102) and when they saw him coming up to them, they stood on both sides of the way, and stretched out their right hands, saluting him, and making all sorts of acclamations to him, and turned back together with him.
Josephus describes precisely the spectacle that Paul is using as a metaphor to describe the return of Jesus. This same idea is implied with the word “Coming” [παρουσία] which literally means “presence” (Cf. 2 Cor 7.6; Phil 1:26). In the ancient world there was a common spectacle whereby citizens would leave their city to meet a visiting dignitary or newly appointed king. Then, these citizens would accompany their ruler back to the city and celebrate. Paul is drawing on this imagery to encourage suffering believers of their coming vindication as they will rise to meet Jesus and celebrate his eternal reign on earth.
The will not be a rapture. Not today, not tomorrow not ever.
[1] Oral Roberts, How to be Personally Prepared for the Second Coming of Christ (Tulsa, OK: Oral Roberts Evangelistic Association, 1967) pg 34.
[2] Hal Lindsay with C.C. Carlson, The Late Great Planet Earth (New York: Bantam books, 1970) pg 126.
Posted by Unknown at 11:12 PM

I love the analysis of the Noah reference in scripture. It is amazingly clear when you think through the metaphor(simile?). Can't wait for Bob to read this as it is a continuation of the visit we once had about the Anti Christ and the rapture. When are you going to submit this for publishing?