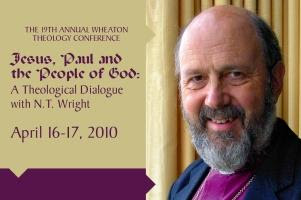 The good bishop of Durham was kind enough to enter into dialog with nine of his colleagues, including three former students, and allow 1,100 eager students of the New Testament to listen in. Actually, the folks at Wheaton have been kind enough to make mp3s of the paper presentations, panel discussions and chapel messages available online for free. So I would imagine the "listening in" is going to be much broader than the group in attendance. In all honesty, each of the presentations is worthy of listening in.

Each paper was in line with the theme of the conference, "Jesus, Paul and the People of God: A Theological Dialogue with N.T. Wright." Day one was devoted to Wright's Jesus and day two focused on his Paul. Richard Hays, who was partially responding to critiques leveled against him by Wright at a Boston SBL meeting, said it quite well in the opening paper presentation, "Adulation is for rock stars, but rigorous critique is for friends." This was a meeting of friends to celebrate the work of one of the most brilliant and productive theological minds of our time.

The whole event was permeated by prayer and conducted in worship. Grant LeMarquand punctuated the conference with liturgy, personal anecdotes of his student days under Wright and a general air of grace.


Though I thought he seemed somewhat starry-eyed from the attention from people he genuinely respects, Wright was at the top of his rhetorical game. He was witty, charming and very British. He humbly accepted the need to clarify in some areas, but also stuck to his exegetical guns and tried to explain some of the critiques leveled against him by pointing to the historical context of his writing projects. My only complaint is that the conference wasn't longer. Sunday would have been a great day for panel discussion on a whole host of issues.

On a personal note, I was blessed by the congeniality of everyone involved. I went with an elder from the church where I serve and was blown away by his ability to keep up and even offer sound critical reflection. I knew he was an intelligent man, but his keen insight to the scriptures and humble approach to learning made me proud to serve alongside him.

Probably the best part of the conference for me was a late night conversation. Both recognizable scholars in their own right, Michael Gorman and Nijay Gupta were overwhelmingly gracious to sit down with a couple of lowly masters-level students and field questions for over an hour about everything from where to apply to PhD programs to how to prepare now and what to expect when we get there. The conference itself was wonderful, but the time Drs. Gorman and Gupta spent was surreal for me and I won't soon forget it. I can only hope that all who attended were encouraged as much as I.

Thanks dude! Wish I could have been there with you!!