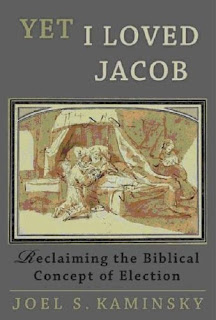 Outside of John Piper and his reformed ilk "election" is considered a dangerous doctrine. It is seen as a theological tool for totalizing others. The very idea that God would play favorites is downright unfair. I admit that I've felt the unfairness. How can the God who I see in Jesus, the God who loves enemies and sends rain on the righteous and wicked, the God who dies for the ungodly and desires all men to be saved, choose some and not others? Surely, the universal love of God we see in Jesus flattens out that ancient tribalism. We are ready to move beyond such ethnocentrism, or religo-centrism, or whatever centrism it is that makes God for "us" and not "them." Election! Who needs it?

If one is so bold as to admit election is indeed present in the Bible and thus ought to be reckoned with by those professing to follow Jesus, then a different kind of flattening often occurs. Election is indeed present in the Bible, but it's so broadly defined that it means little more than "God really likes everyone." Or, God celebrates particularity in election and so everyone's particularity becomes what God wants‒Yahweh the Postmodern. In either case it is difficult to tell what God wants other than what I'm already doing. I too have fallen prey to this sort of thinking.

It would seem easy to simply avoid talking about election much. Unfortunately, as I've been studying through Genesis this semester one of the glaring theological issues shining right through the patriarchal narratives like a sliver of sunlight streaming between lazily pulled curtains is election. Despite my best efforts to ignore it, favoritism is everywhere. God chooses Abram for no apparent reason (Gen 12.1‒3) and sticks with him despite some clear indications of character flaw (12.10‒20; 16.1‒6). Still, Abraham's moral gray pales in comparison to "deceiver-boy" Jacob who consistently lives up to his name (Gen 25.29–34; 27.1‒34; 31.1‒42). The family favoritism of the Joseph narrative is obscene. As one preacher put it, "You half expect James Dobson to come riding in on a camel and smack 'em upside the head." Though I might like to avoid election altogether, the Biblical text forces a reckoning.

In, Yet Jacob I Loved: Reclaiming the Biblical Doctrine of Election, Joel Kaminsky gives a thoughtful, nuanced view of election in the Hebrew Bible and its significance for contemporary Judaism and Christianity. The focus of Kaminsky's work is clearly the Hebrew text with brief reflection on contemporary significance. He is right to suggest that one must approach the text seeking to understand it prior to dismissing it. Indeed, "Too often the cultured despisers of the notion of choseness have portrayed it in inaccurate and simplistic terms" (10). He is even willing to suggest that though election is hugely significant in Jewish and Christian tradition this "does not compel that election is a good theological idea" (193). Though, I've only been able to skim through Kaminsky's work due to time constraints with other projects, I heartily recommend it. Election, like it or not, is part of the Christian heritage. As Kaminsky suggests, we must learn to understand what God's election means. There are numerous scholarly reviews as well as Kaminsky's response available at Review of Biblical Literature.

It seems that in the Bible, election is often tied to function, or purpose. God's election is not quite so arbitrary as we might think. Also, it is not the same thing as unabashed favoritism, though Kaminsky thinks that element is present. Election is God's partnering with human agents in special way. Obviously, this needs filling out but studying Genesis along with the rest of scripture and stumbling upon Kaminsky's book sparked this post.

How as Christians do we understand election? What does it mean for us to be God's elect?

Does he, and would you, argue that election in the OT and NT should function in exactly the same way? Are there any ways in which the concept has been redefined by Paul?

His focus isn't at all on the NT. He has one chapter at the end.

I would suggest that with most things Paul does with the OT there is both continuity and discontinuity. Election may be modified, but to be properly described as "Jewish" it has to resemble the election of the OT. As I see it, Paul sees most of his Jewish assumptions being re-centered around the significance of the resurrection. As J.L. Martyn suggests, a whole new age has begun and that changes everything, or at least it changes everything to some degree or another.

My theological convictions lead me to suggest that election becomes more conditional in the NT and almost entirely instrumental. In the OT, however, there are more cases of election seeming like unfair favoritism. Within this paradigm I have to be careful not to devalue Judaism as the foil for superior Christianity. Still, I am in fact a Christian and not a Jew so . . .

One issue that crops up in all this is the whole concept of fair and justice. What in the ANE and Greco-Roman world can be described as "fair" is not necessarily the same as the contemporary Western mind.

Good question Eric. I don't know that I've done much in the way of answering so much as clarifying how to move forward. What are your thoughts on the same questions?