Three Views on the New Testament Use of the Old Testament 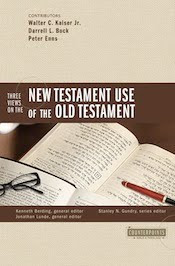 As early as the second chapter of the New Testament (Mt 2.15) the careful reader comes across the puzzling way in which the OT is used in the NT. Actually, it happens before Matthew 2.15 = Hosea 11.1 (e.g. Mt 1.22 = Isa 7.1), but this example graces the cover of Zondervan's most recent book in their "Counterpoints" series‒Three Views on the New Testament Use of the Old Testament. The goal of the book is "to expose [. . .] readers to a range of approaches to some of the question posed by this issue, in hope that their understanding will be deepened at various levels" (10). To this end, they pose five questions to three contributors. The five questions are as follows:

As with any anthology or compilation some parts of the book are far better than others. The introduction and conclusion were very well done, offering a brief but comprehensive overview of the issues and relevant bibliographic material as well as a succinct summary conclusion. Still, the main issue with this book is that there was not enough diversity of perspective to represent a broad "a range of approaches." All three contributors are placed on the evangelical point of the theological spectrum. It would have been nice to hear from another scholar who has done a lot of work in this area who would not necessarily identify with the title "evangelical" (i.e. Richard Hays, Steve Moyise, Christopher D. Stanley, Francis Watson). While these scholars are certainly experts in the field, it is not beyond them to write for a lay audience. On this very issue, Moyise and Watson have specifically endeavored to do so. Despite this lack of non-evangelical perspective, as an introduction to the issues of how the NT uses the OT this is a helpful book.

Here is a very basic summary/critique of the three positions offered in book followed by a summary of their answers to the five questions posed above:

Representing the, in my opinion, completely untenable view that the NT uses the OT consistently with historical-grammatical exegesis is Walter C. Kaiser Jr. Kaiser is a reformed OT scholar who served as both president and professor, at different times, at Gordon-Conwell. He has a laundry list of publications including contributions to almost forty books and numerous journal articles. Still, his argument is based entirely on the hermeneutical assumption that a text can only mean one thing. He spends his first eight pages arguing that the NT writers cannot possibly mean something not intended by the OT writers. In Kaiser's view, if the writers of the NT did use scripture in ways that the OT writers did not mean then they would do violence to the OT text. Kaiser tellingly quotes John Owen, "If the Scripture has more than one meaning, it has no meaning at all" (75). In the end, it is clear that Kaiser is seeing this as a matter of faith predetermined. He suggests, "It is only when we begin to doubt that the NT writers were faithful to what had been written in the OT that we begin to face problems" (88). I would humbly suggest that as we read passages and think about how they do and don't relate "problems" are aplenty.

The middle-ground is taken by Darrell Bock, professor of NT studies at Dallas Theological Seminary. Bock is a NT scholar who has made a name for himself writing on Luke, but is expertise is not limited as such. Though Bocks' argument is mostly a reprint of earlier work elsewhere, his suggestions are helpful. Basically, he argues that the NT writers used the OT in ways that went beyond the intention of the OT writers, but they did so in line with the meaning of the OT passage. So, in Bock's view, "the NT meaning can develop or complement what the OT meant, but not in a way that ends up denying what the OT originally affirmed" (116). Bock's argument is, I think, much more representative of the evidence than Kaiser, but still comes off as special pleading to save the NT writer from critique for failing to do his exegesis properly.

The third position is written by the OT scholar Peter Enns. Recently, Enns has been the subject of much controversy. After publishing his book Inspiration and Incarnation, Enns was suspended from his teaching post at Westminster Theological Seminary where he served for 14 years (read the story here). Later he was fired. The main contention of the Westminster trustees is that Enns' analogy of scripture as incarnational is inconsistent with the Westminster Confession's doctrine on scripture. In the Three Views book Enns continues to use that same analogy to describe the "humiliation of scripture as a positive theological construct" (202‒204). The point he makes is that, "the 'creatureliness' of Scripture is not an obstacle to be overcome, but the very means by which Scripture's divinity can be seen" (204). His theology and work are interesting and, in my opinion, an example of robust faith thinking critically about the discipline of OT studies and theology.

Enns' chapter in Three Views is, I think, the best of the three. Instead of assuming what Scripture can say, or must say, Enns takes an inductive approach. He looks at NT examples of the OT that do not seem to reflect the OT original author's (or authors as the case may be) intended meaning. Paul's argument from the singular noun "seed" in (Gal 3.15‒29), for example, clearly does not accord exactly with the point of Genesis (13.14‒16; cf. 12.7; 15.5; 21.12; 24.6–7; Three views pgs 180‒185). Enns also points out that NT authors reflect interpretive traditions that are not found in the OT but rather second temple literature (Gal 3.19; Acts 7.43; Heb 2.2; 2 Tim 3.8; Jude 9, 14‒15; 2 Pet 2.5; Three Views pg 196). He suggests, then, that "how the NT authors approached the task of biblical interpretation (their methods) and how they understood certain OT episodes (their traditions) boldly bear the unmistakable stamp of their historical setting" (202). The NT writers, according to Enns, use scripture in new and different ways than OT authors may have intended, but that's okay because they reflect their historical setting and the eschatological advent of the Messiah. I was intrigued by Enn's approach, but I still wonder how it all works out. If scripture is humiliated, what becomes the most authoritative voice for the faith community?

This short book is certainly not the only thing out there in pursuing questions about the NT's use of the OT, but it is a helpful introduction.

"If scripture is humiliated, what becomes the most authoritative voice for the faith community?"

Once you're able to stop worrying about having access to a "most authoritative voice," I think you'll begin to come into your own.

Ditto on the summary.

FTR, I'm glad you worry more about communal authority than "coming into your own."

You can be be uncharitable about my "coming into your own" comment if you'd like. But you know that my point was that I think Tyler's ability to do theology for the church is hampered by his need for that "most authoritative voice." "Coming into your own" means doing good theology that is useful and helpful for real people on the ground.

So thanks very much for the sarcasm.

you have talked me into reading it.

In other words, perpetuating this dependency on the elusive "most authoritative voice" is doing his faith community a disservice.

You're welcome for the sarcasm - my response to what I perceived to be your (less than charitable) patronizing. I did not read "come into your own" as referring to his building up of the church. If I read you wrong, I apologize!

Substantially, I don't agree. The single voice is at times elusive and always demands discernment (together), but I don't see trying to listen and discern as a disservice.

That sounds too harsh. I assumed that you were being playfully patronizing, so I was trying to respond in kind.

I wasn't being patronizing at all. Tyler is supposedly a nonfoundationalist. Yet he keeps reverting back to foundationalist ways of thinking.

And the problem is not identifying God as the voice we're supposed to listen to. The problem is the simple equation of one set of texts as that authoritative voice of God, as well as the implicit refusal to recognize that God speaks outside those texts in "other voices," a truth to which Tyler's own Bible attests in numerous places. Tyler keeps talking as though any challenge to "biblical authority" means we're just setting ourselves up over against "God." We're saying our voice is more important than what God has already said. That assumes the Bible can be simply equated with "what God has said," and that is problematic on the ground. Nobody treats the Bible that way, no matter how much they claim they ought to.

The need to discern God's voice isn't limited to the text of Scripture. God speaks everywhere and if we use the Bible as a trump card against all other voices, we're going to miss him.

Most ordinary Christians get this: they just are afraid (or don't know how) to articulate this. I'm suggesting that Tyler is doing them a disservice by reinforcing a paradigm that only gets lip service and would be disastrous if taken seriously.

It's also absurd for Tyler to continue to talk about Scripture as a "most authoritative voice" in the singular, as if the Bible constituted one voice. He knows full well that there are many voices in Scripture, not all of which agree on everything. Talking about the Bible in terms of "most authoritative voice" is also misleading, because Tyler knows better than that. Which biblical voice is the "most authoritative"? Jesus', I presume. Well, which biblical Jesus? If Tyler wants to pretend like there's only one in "the text," eventually he's going to have to misinterpret the text in order to make it sound like a "single voice."

I don't think it's the people Tyler is ministering to that are afraid of treating the text more like a conversation than a monologue. Some are, but the majority of those afraid of that are Tyler's bosses.

Looks like I got here just in time. Let's clear up the MAJOR issue from the article...

John Owen was never wrong about anything.

I'm part of a community that loves Walter Kaiser and his way of understanding the relationship between the OT and the NT, but like you, when I tried to read his "Promise Plan of God" I found his basic hermeneutical approach very weak, and I was not convinced by his attempt to distance himself from dispensationalism while maintaining such a basic distinction between Israel and the Church.

Given your interest in this subject, you might find the post I just wrote over at my blog interesting. It follows the approach I've seen in Hayes and Wright's work, which I've become pretty sold on. But I would love any input or critique you might have, if you get a chance to read it.