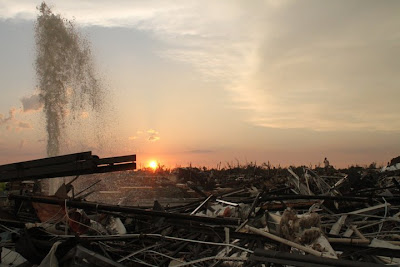 As everyone already knows, the small town of Joplin Missouri was hit by the most devastating Tornado in recent memory on Sunday evening. Check out some before and after photos here.
Check out raw footage:
Growing up in Arizona, I remember learning about “Tornado Alley” in grade school and thinking to myself, “Of all the places in the world, why does anyone live there?” Years later I was attending a small college right in the middle of tornado alley. Having spent five years in Joplin, I know the fear and frequency of tornado warnings. My wife and I rented a small house that was just a step above a shack. When the sirens went off we would huddle in our bathtub with wedding pictures, our cat, a flashlight and the radio alarm clock to listen for weather updates.  Thankfully, our fears never materialized into destruction in Joplin. We did, however, see numerous towns decimated in surrounding areas. Despite my experiences with tornadoes and seeing aftermath in nearby towns, I have never seen anything like the current state of Joplin.
On Monday afternoon, we received a call from a member of our church who owns a semi-truck and trailer. After staying up most of the night listening to the police scanners in Joplin, he wanted to know if we could help fill the trailer with relief supplies to send to Joplin. Initially, we were skeptical that the trailer could be filled, but we consented hoping to help in some small way. I spent Monday late afternoon and evening collecting goods as they slowly appeared in the parking lot. It looked grim for filling up a pickup truck. 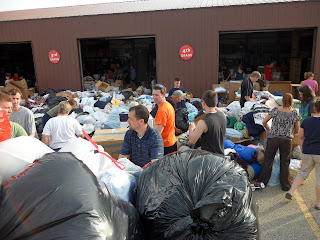 I arrived at the church on Tuesday morning ill prepared for the outpouring of generosity we saw. Numerous members of the church showed up to help organize and pack the supplies as donations came rolling in steadily accumulating to over four semi-truck loads of relief supplies. I was neither the first person to arrive nor the last to leave on Tuesday, but after eleven hours of packing, directing traffic, and shrink-wrapping pallets, I was exhausted. My neck was burnt to a lobster red. My feet throbbed from standing on concrete all day. I was ready to be done.
I got a call that evening that more people were needed for the trip down to Joplin. I was torn. Part of me desperately wanted to be in Joplin to encourage old friends, to help with the relief efforts, to do something. But I knew this would be a “drop off turn around” operation. There was no promise that we would see much of Joplin. The farmers who generously donated their time and trucks had to get back home to their families and their crops.
The convoy left Wednesday morning at 7:30 and we began our eight hour drive to Joplin. On our way we drove through more inclement weather to arrive at Joplin around four o’clock in the afternoon. The church we’re partnering with acquired a massive warehouse where they are storing supplies. While the forklifts unloaded, the senior pastor of the church there took us into the carnage.
At first we drove through a wooded area with houses scattered throughout. Trees were uprooted, stripped of their leaves, branches torn off and strewn about. Soon we were driving through the area where the debris from the leveled Wal Mart and Home Depot were dropped. Sheet metal was wrapped around the trees still standing like a blanket around a small child. Roofs were torn apart and shrapnel protruded from houses. We thought it was bad, but hadn’t seen anything yet.
Soon we began to see piles of unidentifiable scrap. Occasionally, we would notice the rear end of a car sticking out of the top of a mountain of debris. Then we came over a hill and I saw where the largest Wal Mart in town once stood. It was mostly gone. Our guide told us that he and a friend first went to Wal Mart to help on Sunday night, “We found lots of people . . . some alive, some . . . not.”
Laura, one of my wife’s closest friends, lived in the apartment complex located directly behind the destroyed Wal Mart. She was inside her second story apartment when she heard the siren and barricaded herself in the bathroom. Laura listened in trembling fear as the roof was violently ripped away and rain began to pour into her apartment. Amazingly, she lived through it. Climbing her way downstairs she walked to her husband’s work to see if he was still alive. She found him and together they walked through the destruction to her parent’s house, miraculously still standing.

An aerial view  of apartments right next to Laura's pictured right.
Laura's apartment from the outside: 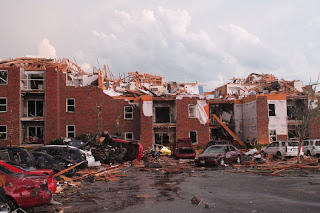 To the south of Wal Mart were the remains of a leveled Home Depot. There were even more fatalities in Home Depot because of the sharp and heavy objects inside. Our guide told us a story about a woman driving home who watched as a two-by-four piece of wood came flying through her windshield and speared through her and her car seat. He couldn’t bear to say much else about it.
Driving one block west of Rangeline Road, where the Wal Mart and Home Depot once stood, we turned around in the remains of a neighborhood. Some houses were blown off their foundation. Other homes were missing roofs. We watched a man use a billboard sign as a make-shift tarp to temporarily patch a massive hole in his roof. We saw a garage door graffitied, “You loot, we shoot!” Worst of all, we saw a totaled truck with a spray-painted message on its side, “Looking 4 Zachary and William please call . . .” (pictured below). Hundreds of people are still missing. In silence we witnessed the despair and loss inscribed everywhere on the hellish landscape. 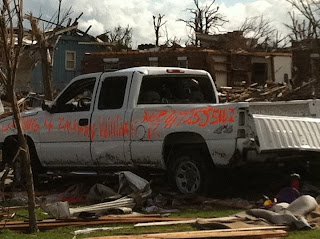 We heard about a young man named Will Norton who was driving home with his father from his high school graduation. The father and son were caught on the road when the storm hit. The wind blew the sunroof off their car and as Will’s father tried to grab hold of his son, Will was torn out of his seat belt and sucked-up through the sunroof. As of yesterday, Will is still missing.
There are numerous other first person accounts of the tornado available here. You can also read an extremely well-written first person account of an ER doctor from St. John's Hospital (pictured below) which was devastated by the twister here. 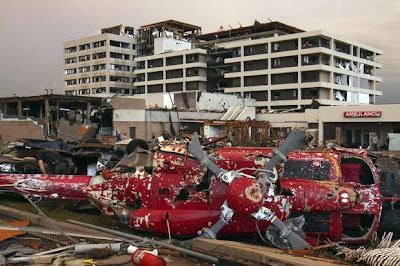 Unfortunately, we could not spend more time in the city. The trucks were almost unloaded and the warehouse needed us to move out to prepare for more supply trucks. We also knew that there was no room for gawkers when rescue workers needed roads clear for finding people still trapped in the wreckage.
After our departure we drove for another three hours before stopping at a hotel for the night. The convoy arrived back in Champaign Thursday afternoon at around 1:00 pm. I was exhausted and happy to finally just relax. My head began to swirl with all of the chores I would need to attend to after the craziness of the week. The lawn needs mowed, e-mails to return, a sermon to write . . .
Then I remembered the people in Joplin. Most of the workers in the warehouse were school teachers, pastors, high school students and local volunteers. They probably hadn’t slept for three days. Houses were in rubble. Families devastated. Everything changed. But for them, there is no relaxing evening to come. There is no end in sight. Their feet hurt. Their necks are sunburned. Their lives are changed.
For them, the relief work is just beginning. I can only hope that we will have the fortitude to partner for the duration of the process. May the contribution of supplies be just the beginning of our efforts as well.
Posted by Unknown at 1:27 PM

Thank you for sharing. You said it all, we can lay in our beds and say prayers for them but they have no time for rest and not even a bed.