apocalyptic made easy? – a review of craig hill’s In God’s Time 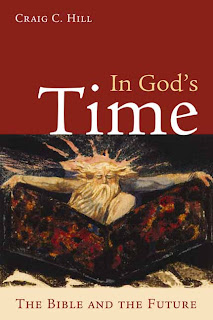 Any popular-level book on eschatology endorsed by the likes of Eugene Peterson, Luke Timothy Johnson, Jürgen Moltmann and John J. Collins merits some attention. Hill intended to write "a book for people who want to come to grips with what the Bible says about the future" (vii). The people he's addressing, he hopes, are the non-experts, laymen and pastors. His writing is lucid, compelling and sometimes downright poetic.

He begins the book with a brief chapter on the eschatological nature of the Christian faith. In the vein of Barth, Moltmann and Schweitzer Hill argues, "Christianity is irreducibly eschatological" (4). Accurately, and tellingly, he roots the eschatological outlook of Christianity in the resurrection of Jesus. Unfortunately, the eschatological perspective of the NT, he suggests, has been demythologized by the modern world. This isn't just a problem with moderns, but is noticeable in the pre-modern cosmology of the early Christians and rooted in a view of creation that Hill considers untenable. Still, Hill thinks eschatology is salvageable, as the core of Christian theology, but not without dealing with difficult questions.

He begins with a book that looks to be about eschatology, but the content is quite different. What he presents in the rest of the book is a history of religions approach to Christianity. So, his second chapter, "First things First: The Bible," is about the nature and authority of the Bible. Though starting out as a "fundamentalist teenager" Hill has moved on to a more nuanced faith. He writes, "More than twenty-five years and three theological degrees later, I am still a Christian. The core of my faith has not changed all that substantially, but my understanding of the Bible has" (14). I think he is correct in his movement beyond the language of "inerrancy" for understanding the nature of Biblical authority. Still, I was frustrated by his approach that leveled out the distinctiveness of the Bible in favor of finding out what is common to the Bible and other religions.

In his third chapter, Hill gives a brief but helpful account of biblical history. He focuses on prophesy and biblical revelation within the context of the Ancient world. He is correct in suggesting that "biblical prophecy as a whole is more concerned with influencing the present than with revealing the future" (33). His views are decidedly less conservative wholeheartedly embracing source criticism. Still, his presentation of the meaning and function of prophesy is helpful and a welcome alternative to the divination approach to eschatology found in the LaHaye's and Hagee's.

Chapter four, cheekily titled "Apocalypse Then," is an extended introduction to Jewish apocalyptic literature. Here is obviously dependent on John J. Collins and R.H. Charles, but still manages to present a helpful introduction to the apocalyptic material that is inaccessible to the average Bible reader.

After analyzing non-canonical Jewish apocalyptic, Hill looks specifically at the books of Daniel and Revelation. He insists that there is in fact very little difference between these apocalypses and the works of early Judaism that were not canonized. He mostly takes the party-line of contemporary scholarship (a late date for Daniel, and standard fare on Revelation). He does, however, occasionally take odd positions on some issues. I was dumbfounded by his odd suggestion that chapters 19 and 20 of Revelation are "two popular but competing scenarios, the first of an earthly and limited messianic reign and the second of a cosmic and eternal kingdom" (126). Though Hill is comfortable with that kind of bizarre discrepancy, I sincerely doubt John was and it seems like a genuine lack of effort in trying to explain what is happening in these important chapters. Overall, I think Hill's work on Revelation suffers significantly from failing to take account of the structure of Revelation.

Having spent time in apocalyptic, Hill moves to Jesus and eschatology. He argues for an eschatological Jesus in the same tradition as E.P. Sanders, N.T. Wright and Dale Allison Jr. This chapter is a very helpful and readable introduction to the evidence, which I find overwhelming, that Jesus was an eschatological prophet. Oddly, Hill spends very little time on the most significant eschatological discourse of Jesus (Mt 24.1‒51 || Mark 13.1‒37 || Luke 21.5‒36). It receives only about two and a half pages and Hill explains nothing but his lack of attention with the statement, "many of the apocalyptic elements of this chapter are unparalleled elsewhere in the Gospels. It is possible that Jesus said these things, but it seems just as likely (if not more so) that these verses reflect primarily the hopes, experiences, and concerns of believers a generation removed from Jesus" (165). Why he excludes the most apocalyptic material attributed to Jesus is nothing short of puzzling.

The last major chapter of Hill's book "The Once and Future Kingdom" is a discussion of eschatology mostly focused on the Pauline corpus. The whole discussion is framed in terms of the old "future" vs "realized" eschatology. He places the NT writings somewhere on the spectrum of "future" and "realized" and allows the two poles to serve as theological yardsticks. The description of theology as falling somewhere along that eschatological spectrum is a load to heavy to be borne by the simplistic categories (e.g. 190). Still, his account was a vivid and fresh reading the eschatological outlook of the NT as a whole.

I find it unlikely that In God's Time would be well received in evangelical circles, which despite the way Hill writes, are not the same as fundamentalists though they do sometimes overlap. While his writing is sometimes poetic, his argument is overly-simplified and sometimes oddly suspicious of the canonical texts. This is a helpful book for someone trying to communicate the meaning of apocalyptic eschatology to those without any frame of reference, but it should not be the only, or even primary introduction.

Adjectives like "frustrated," "puzzling," and "odd" say more about you than they do about the author under review.

"I was frustrated by his approach that leveled out the distinctiveness of the Bible in favor of finding out what is common to the Bible and other religions."

I'm sorry this frustrates you.

That's it. Keep on perpetuating the myth that source criticism is a "conservative/liberal" issue, not an academic one.

"He mostly takes the party-line of contemporary scholarship (a late date for Daniel, and standard fare on Revelation)."

"Takes the party-line" has pejorative connotations and makes you sound like you're disgruntled because he doesn't stand with a tenuous minority position.

"Why he excludes the most apocalyptic material attributed to Jesus is nothing short of puzzling."

First of all, he DOESN'T exclude this material. According to the quote you selected, he says it is possible that the material goes back to Jesus, and possible that it does not. He is hardly alone among scholars who suggest that it may not, and they way he words it is quite moderate in comparison to many. But he gave a good reason why it might not go back to Jesus: "many of the apocalyptic elements of this chapter are unparalleled elsewhere in the Gospels." He is also alluding to an important point here: "these verses [may] reflect primarily the hopes, experiences, and concerns of believers a generation removed from Jesus." They clearly do reflect the concerns of believers a generation removed from Jesus, which would explain why they were included in Mark (and then again in Matt and Luke) despite the problematic nature of the material. If he should be critiqued for anything, it should be for not dealing adequately with the problematic nature of Jesus' predictions. In light of those, and from a perspective of faith in Jesus, it is anything but puzzling(!) why he would want to distance Jesus from this material. Thus, I am puzzled by your puzzlement.

"While his writing is sometimes poetic, his argument is overly-simplified and sometimes oddly suspicious of the canonical texts."

If you read Tobit the way you read a canonical text, I think people would be justified in calling your reading of Tobit "oddly unsuspecting." Your use of the word "suspicious" here also has pejorative connotations. What you mean is, "I don't think he is justified treating biblical texts like he would treat any other ancient religious texts." And since that is what you are saying, you are obliged to give some sort of indication why he isn't justified in preventing his faith from interfering with his scholarship.

Other than these criticisms of your criticisms, it's a decent review. His book sounds boring.

Thanks for your critiques. I want to get better at writing reviews. I'm going to try and be more disciplined about it because if forces me to engage and critique arguments.

I think the source critical arguments concerning the gospels are still open for debate. I should have avoided the term "conservative." I don't want to boil the issue down to conservative vs. liberal.

I didn't mean for "party-line" to be pejorative just descriptive. I'm not opposed to a late date for Daniel, in fact I thought his argument for it was pretty good. His stuff on Revelation was good too, just nothing really new or illuminating. I will use a different phrase next time.

I was puzzled by his exclusion of the apocalyptic material of mt 24 and parallels because most other advocates of eschatology as a major part of Jesus' program do not exclude the material. The lack of parallels elsewhere in the gospels is not in my view problematic at all. If Jesus was an eschatological prophet like John the Baptist before him and the early church after him, then it would make sense for him to have said the things attributed to him in the so-called "olivet discourse." That is what I found puzzling.

The book started out very well, but I wasn't overly impressed at the end. I don't think I would call it boring though.

Once again, thanks for the critique of my critique. I need it.

By the way, we should go to the SBL meeting in Atlanta together. Are you planning on attending? Maybe we can split hotel costs or something?

Among critical scholars (that excludes apologists like Wright et al) who are actively working on historical Jesus issues, I think apocalyptic Jesus advocates are actually in the minority. Crossan, Borg et al have had quite an influence arguing that apocalypticism skipped a generation with Jesus.

Allison and Ehrman, I think, are right, but I think they're in the minority among critical scholars.

SBL may be possible. It would certainly be fun. When is it? Are you presenting?

No I'm not presenting. I just want to go and check it out.

Here's a link to the SBL site:
http://www.sbl-site.org/meetings/Meetings_Registration17.aspx

It's a possibility. I'll have to wait and see what's on next semester's syllabi.